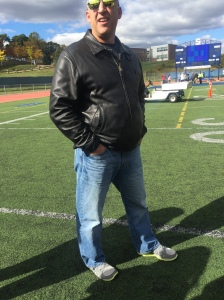 “You’re it. Your life. Your decision.” That’s the Teen Awareness Group (TAG)’s motto.

Unfortunately, though, sometimes life throws something at you that you can’t control, something that’s not your decision at all. I learned this the hard way today.

I didn’t think anything at first of the texts and calls I was getting this morning at 5 from members of Staples High School’s TAG, of which I was co-president last year and Chris was advisor of for many years. But when my little sister called me at 6 a.m. (my time), I knew it must be important.

I couldn’t believe it. I mean, I really still can’t. I screamed “NO” over and over again and my whole body shook and tears spilled out uncontrollably. I couldn’t catch my breath for what felt like, and honestly may have been, an hour.

Chris Lemone was (and will remain) one of my favorite people ever. When I wrote him a thank you note at the end of the year, I told him that I’d like to stay in touch forever, to which he said “absolutely.” I told him I could guarantee that he was someone who would be at my wedding, that we would still be close friends in 10 or so years. I even had a 30 minute conversation with him over the phone a couple of weeks ago when I was having trouble settling in to college and he made me feel a million and a half times better and was so happy that I called.

It’s just all so ironic. Chris was one of the best guys I knew and one of the last people to deserve anything negative in his life, let alone this.

He spent all of his time working to help people and make the community a better place. He must have changed and bettered the lives of more people than I even know in total.

There’s no other way to say it besides that it’s not fair. To say it as Chris would have said it, “It’s just really f*cking unfair.”

On an even more personal note, Chris saw more in me than I ever saw in myself.  I was never able to truly express to him with words how grateful I was for his faith in me. So I tried to use my actions. He made me want to be so great that I really did live up to his vision of me.

At the end of the year last year, he wrote me the nicest letter I’ve ever received, praising my leadership and my passion. I hope he understood that so much of what I did was in hopes that it would make him proud and that he would speak highly of me as he did of other past TAG members.

I now hang that letter next to my bed to remind myself every day to be the person that Chris saw me as.

What makes this even harder is that usually, Chris is the person I would call if I was ever feeling as I do now: weak and helpless and sadder than I thought possible.

I’m usually good at giving advice but this time, I’m completely lost. Nothing I say can make it better or make it hurt any less, no matter how hard I try.

So I’m going to try to think like Chris would. He would throw up his hands and raise his eyebrows a little and lean back in his desk chair in the TAG office by the cafeteria and say with a little half-chuckle: “F*ck. Life just sucks sometimes, man. You gotta try your best to make the most of it while you’re alive.”

I don’t know if he’d say it exactly like that but he would definitely figure out a way to throw a curse word in there and he would be blunt and honest but also positive at the same time, as always.

There’s really not that much else to say. I could write about how I cherish so much the times that I would skip class to sit in Chris’ office and give and receive advice. And I could talk about how overly excited we would both get when either one of us would see a new Broadway show or how we would spend way too long talking about plays in general. Or I could mention the secrets we had that no one would ever understand and how happy I was whenever I was around him, even when he played his crazy loud rock music during lunch meetings.

But I don’t need to spend too long talking about any of that because I know that I will always have those memories even if I don’t have Chris anymore.

We know he loved us and he knows we loved him. We can and will remember the good times forever and he will live on through our memories. And in everything I do and whoever I become throughout the rest of my life, there will always be a little part of Chris in there.

It’s pretty fitting that he shared this video on Facebook last month. Without us even asking, he left us with some of the best advice out there:

A good lesson shared by an even better man.

I’ll miss you forever, Chris, and I will continue to live every day trying to make you proud of me.

(P.S. I only included curse words because I know that Chris is laughing about that from wherever he is now).

First photo: Chris ended with TAG on a high note. He was very happy with how this past weekend’s distracted driving event went (and looking very cool in his leather jacket, of course). I wish I could have been there. PC: Jack Norman

Second photo: This is what would happen when not enough people show up to a Freshman Health Presentation. PC: Kendall Rochlin

Hi! I'm Zoe. I made this blog in 2015 right before I graduated from high school so my family and friends could keep track of my adventures on the other coast in LA, and so I could keep writing! View all posts by zoebrown859